RECOVER’s consortium has a strong track record for the valorisation of both industrial and municipal residue streams. Despite successful cases, addressed by the Consortium, the residues generated in different places throughout Europe have specific characteristics and their valorisation also depends upon the support of the regional eco-system.  For the latter in particular, it would be of great benefit if local companies (i.e. both the residue producers and the building material industry) could witness the transition from residue to product first-hand.  This will allow for technological issues to be tackled, but will also challenge the general perception on residue valorisation and promote awareness and understanding.

In order to facilitate this, a modular and mobile upscaling unit (which would fit in four 20ft containers) is being engineered so that it can be brought on site to produce full scale building materials, starting from fresh residues. This approach will be used in RECOVER to upscale the production of high value-added inorganic polymer products, such as fire resistant tiles and porous blocks from red mud produced by Aughinish as well as Boliden and Metallo copper slag.

The choice of the partners reflects different levels of slag-ready-for-application: bauxite residue needs to be thermally processed, in order to be comparable with Boliden’s copper slag, whereas Boliden’s copper slag needs minor adjustments for the minor elements, to be comparable to the Metallo slag. The latter is a clean slag, practically free of Zn and Pb, composed of Fe and Si and only minor content of Al and Ca.

The trajectory to the market for Fe-rich residues. Bauxite residue requires thermal processing, whereas Cu slag of today can benefit from minor adjustments in order to deliver a more reactive precursor.  A clean slag is already available and will be used as the closer to the market case study, where the lessons derived will be used by the other industrial partners to design their strategy.

The general objective of RECOVER is to produce full scale final inorganic polymer products, from Aughinish red mud and Boliden and Metallo copper slag, at the respective companies’ sites, using a modular and mobile upscaling unit. 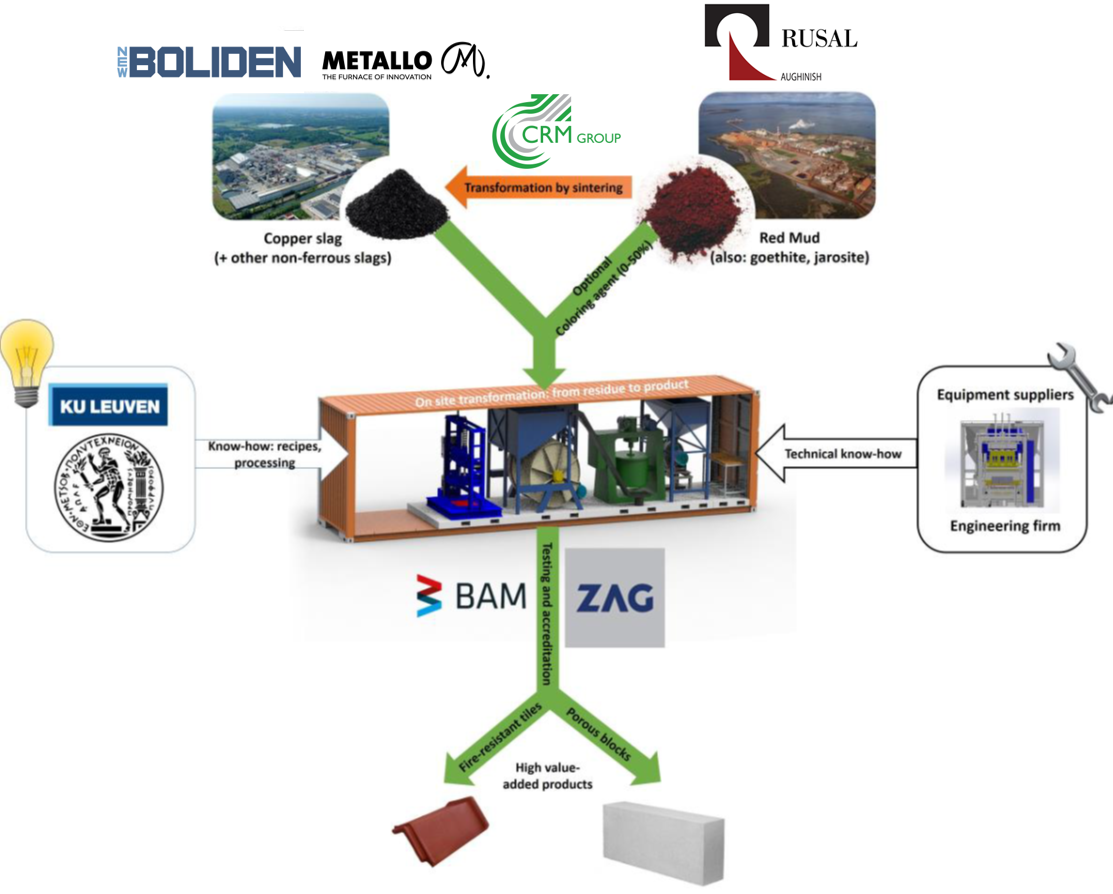 Schematic of the project concept and related partner roles

The following specific objectives have been set for the Project:

This website uses cookies to improve your experience while you navigate through the website. Out of these, the cookies that are categorized as necessary are stored on your browser as they are essential for the working of basic functionalities of the website. We also use third-party cookies that help us analyze and understand how you use this website. These cookies will be stored in your browser only with your consent. You also have the option to opt-out of these cookies. But opting out of some of these cookies may affect your browsing experience.
Necessary Always Enabled
Necessary cookies are absolutely essential for the website to function properly. This category only includes cookies that ensures basic functionalities and security features of the website. These cookies do not store any personal information.
Non-necessary
Any cookies that may not be particularly necessary for the website to function and is used specifically to collect user personal data via analytics, ads, other embedded contents are termed as non-necessary cookies. It is mandatory to procure user consent prior to running these cookies on your website.
SAVE & ACCEPT